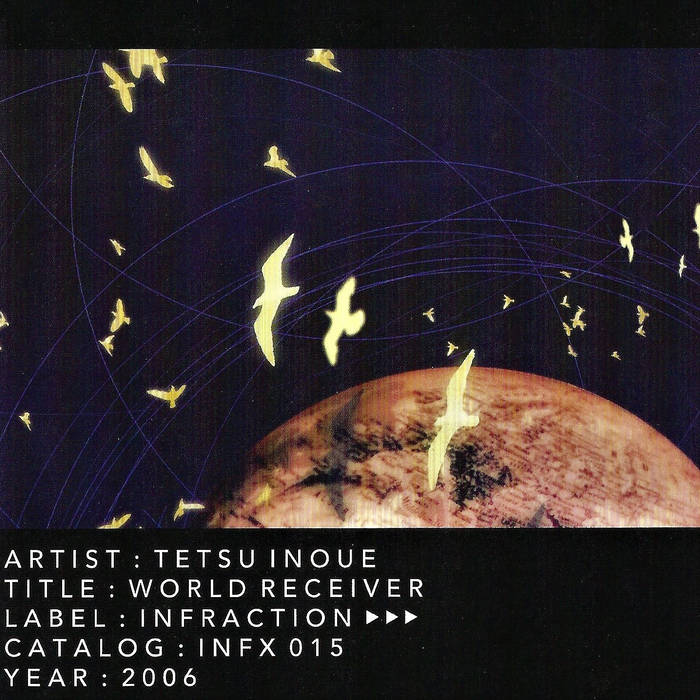 Tresilaze I will never get to the bottom of this album. There's nothing like it. Inoue is a genius.

Devin Underwood (Specta Ciera/Devroka) This album is perfect. From start to finish I'm completely blown away as to how beautiful each song is. Amazing release and highly recommended.

First, this is not a new release or a new reissue. This is the 2006 reissue of Tetsu Inoue's seminal ambient album "World Receiver" being offered for the first time here on bandcamp. CD only.

Contrary to some stories that are circulating on the internet, Tetsu Inoue is or was a real person and a real artist. He collaborated with many from Namlook, Andrew Deutsch, Taylor Deupree, Jonah Sharp, Bill Laswell and Uwe Schmidt (Atom tm, Atom Heart) to name just a few. Those collaborations and solo projects extend from the early 90's to around 2007 where the full-length solo recording "Inland" was issued on FAX records. Tetsu remains elusive and has not been heard of for a number of years. Speculations vary wildly, and the theories of Tetsu's disappearance are not worth going into detail here. I would like to think he is just being reclusive and is happy and well somewhere on this earth. This release is CD only. The digital rights were claimed by FAX back in the day, and until we hear otherwise, will remain there.

Those familiar with Tetsu's work need no introduction to this release. This was arguably his finest release, collaborative or otherwise. He has an impressive discography with the 2350 Broadway series, Ambiant Otaku, Organic Cloud, Masters of Psychedelic Ambience, Inland, Yolo and the more challenging Waterloo Terminal & Psycho Acoustic releases. What makes "World Receiver" special was the integration of atmospheres from Inoue's early works and the addition of the many sounds sampled from across the globe, presumably acquired by Tetsu during his travels. Like any seminal release, the year of inception is irrelevant - as this does not sound like 1996, 2006 or 2018 for that matter.

Noah Jurcin aka Phonaut wrote this in the liner notes on the reissue :

The first time I heard World Receiver, it went over my head. After all, it was only the previous year that I had been introduced to Tetsu Inoue's music. By that time, Inoue had already completed a trilogy of solo efforts as well as host of full length albums in collaboration with other artists. These were mostly deep analog ambient sessions documented across more than two dozen cryptically decorated releases on Pete Namlook's Faxlabel in Germany. During the immersive 2350 Broadway and Shades of Orion sessions, Inoue developed a personal musical language which helped him create a rich, emotional listening experience while at the same time showcasing the outer sonic limits of synthesizers and samplers. At that time ambient music was experiencing a prolific renaissance period, an explosion of material resulting in a bewildering spectrum of all different sounds and fractured styles. Meanwhile, Inoue was also working with a number of other labels from all over the world and collaborating with other musicians including : Taylor Deupree, Andrew Deutsch, Haroumi Hosono, Bill Laswell, Ikue Mori, Uwe Schmidt, Jonah Sharp, Carl Stone and Stephen Vitiello. In the context of the rest of Inoue's discography, World Receiver emerged at an interesting time. It was on the cusp of marking the relative end of his earlier analog (and more ambient) works and the later digital recordings. World Receiver was essentially the first recording to effectively bridge these two types together. It is a triumph of a seamless marriage of field recordings and studio composition. Despite the underexposure from the initial release, some have said that World Receiver is arguably one of the most important electronic recordings to have ever been issued. When I listen to this album, I still discover new sounds and passages that were not readily apparent to me before. It remains dynamic and inspiring a decade after its inception. I hope it brings you as much satisfaction as it has brought me over the years."

We are an ambient label.

Bandcamp Daily  your guide to the world of Bandcamp